Home » Information » Encyclopedia » The birth and development history of masks

The birth and development history of masks

In recent times, due to the epidemic, masks have become a must-have item that various countries are vying to buy, which has made a common daily item a hot commodity. In order to meet the demand for masks, many companies in my country have begun to transform to make masks.

According to historical records, masks originated in China during the Western Zhou Dynasty. At that time, although people had not realized that there were viruses and bacteria, they had already understood that some droplets of the daily mouth and nose spread in the air would bring tremendous health to people. Therefore, in daily exchanges and meetings, both parties will avoid each other a little bit to avoid droplets in the vicinity of each other.

Later in the Tang Dynasty, after the discovery of the Western Zhou Dynasty, people made a new step of improvement, covering their mouth and nose with silk scarves to prevent the spread of droplets. This was also the original prototype of masks.

Until the 13th century, Marco Polo also recorded in his travel notes that in the palaces of the Yuan Dynasty, all palace ladies who offered food used silk cloth to cover their mouth and nose to prevent contact with food. This is also the first recorded mask in human history.

With the continuous improvement of the medical level of various countries in the world, in the 1850s, the teaching assistant at the Vienna Hospital in Austria discovered that the infection was caused by some disease-causing bacteria. Regardless of this small discovery, it also advanced the medical level. A big step. It was not until 1861, more than a decade later, that French microbiologists used gooseneck flasks to confirm the presence of bacteria in the air. This famous experiment was mentioned in elementary school textbooks. 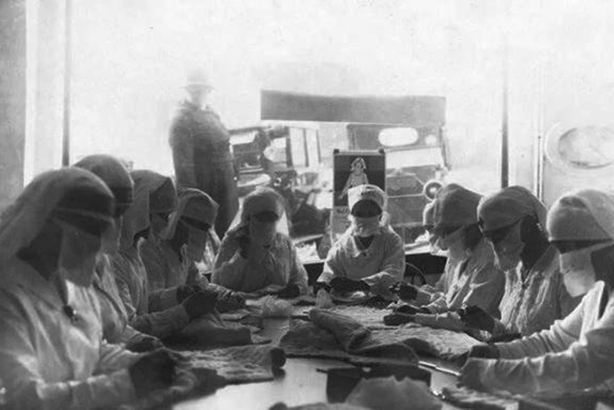 With the accumulation of the above research, at the end of the 19th century, a German microbiologist and several of his students jointly verified the harmfulness of respiratory droplets. They spoke loudly, coughed, and sneezed in a petri dish. The spread of bacteria.

Since then, humans have become more and more aware of bacteria and viruses. With continuous improvement and experimentation, the earliest masks were finally invented, and at that time it was advocated that doctors should wear them during operations. Good masks, this is also a process of popularizing masks in human history.

The earliest masks used a simple single layer of gauze to cover the mouth and nose, but this irregular and airtight mask can give people an uncomfortable feeling. People who wear masks often feel stuffy and breathless. Daily work brings more trouble.

Later, a doctor in Germany realized this problem and began to improve the shape and size of the mask. First, they changed the original single-layer gauze into double-layer gauze, and cut it into a rectangle, and then used iron wire to make a frame. Sew the straps on the side, and only need to be tied to the back of the head when using. This mask is very similar to the masks we use now.

Later, the French doctor Paul discovered that the double-layer gauze could not effectively block the spread of droplets. After many experiments, he found that only 6 layers of gauze could completely block the droplets in the air. So he He started to make changes, but the 6-layer gauze was too thick, so he improved the mask and sewed it directly on his collar. When using it, he only needs to turn the mask over and hold it. Although it is not convenient, but Greatly guarantee the safety of medical staff.