In addition to the exquisiteness of "a complete piece of paper", another major feature of "Kirigami" is its rigorous axial symmetry. The hexagonal snowflake paper-cut is the most famous and representative Kirigami. In addition, there are five-pointed stars and orchids.

Haruki's origami art is not done in full accordance with the traditional Kirigami, but insists on the practice of not using glue. He boldly incorporated his own production methods, focusing on the interpretation of creativity and the extension of the charm of the packaging itself.

When Haruki was creating, he cleverly used the patterns and logos on the packaging to make it appear appropriately and brightly on the new art sculpture. For example, for Haruki's train packaged in Nescafe coffee boxes, the Nestlé logo "NESTLE" is prominently displayed on the locomotive, which tells us without a doubt: it is a "Nescafe" train.

Haruki's works are full of infinite fun and creativity, and there are also inextricable connections between the packaging box and the art sculpture. For example, the colorful packaging of Pringles potato chips, under Haruki's skillful hands, has transformed into a "Mr. Potato Chips" wearing a suit of the corresponding color. The faces of these Mr. Potato Chips are naturally exactly the same as the cartoon images on the potato chip packaging, but " "Lively" stood before us. 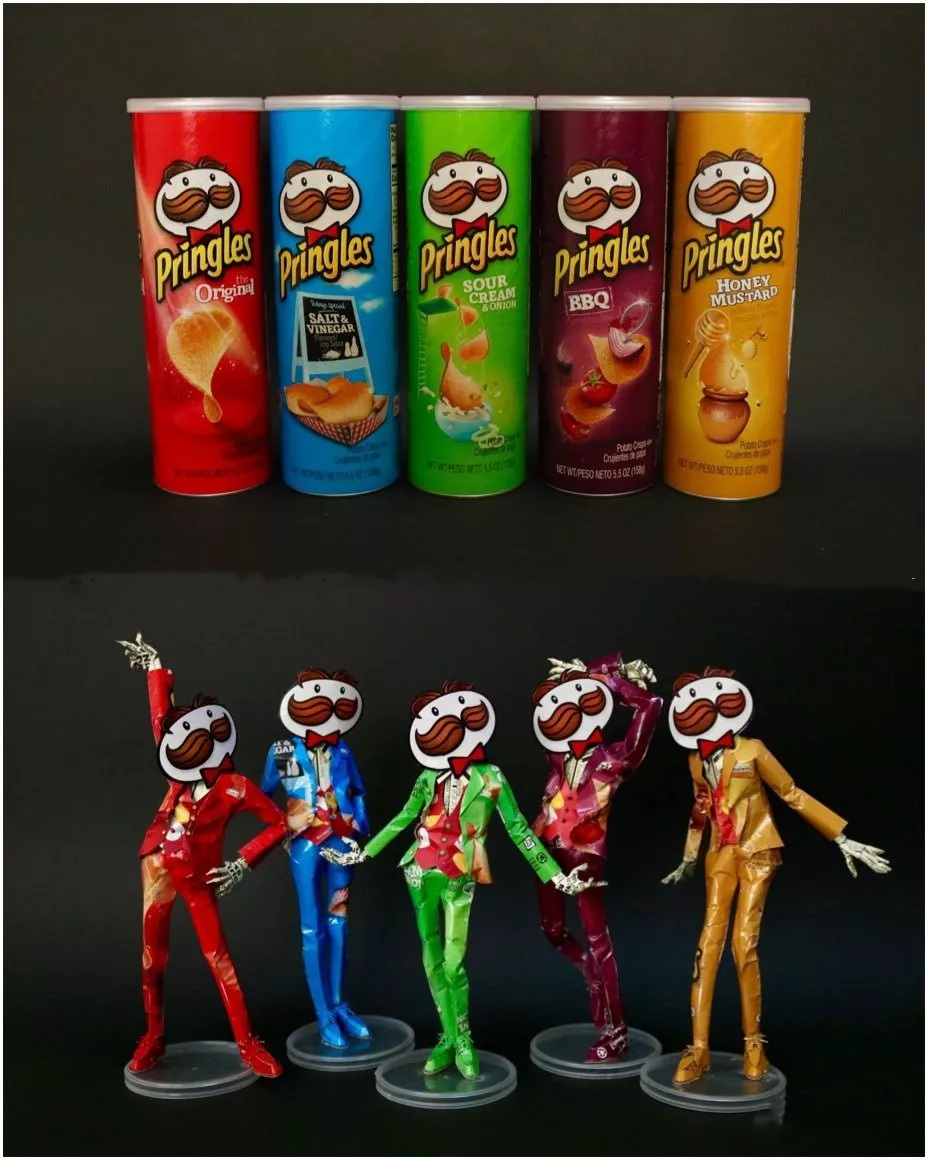 The way Haruki gets inspiration is also very straightforward. The seals printed on the tissue box can arouse his interest. After some of his folds and cuts, the flat seal turned into a three-dimensional seal, which looked lively and agile, as if it could play with its fat tail in the next second.

Haruki's control over details is also commendable. The young lady on the milky chocolate wrapping paper was also made by him in milky packaging. Haruki used the red part to restore the character's skirt, and the facial features cut the face printed on the box. After careful adjustment, the baby-faced girl became a Japanese-style "Barbie", and some Japanese figures Style.

There is also a chocolate box glowing with golden light, transformed into an "invulnerable golden armor", made into a brave medieval knight, there seems to be a romantic story behind it that is difficult to write. There is also the blue biscuit box, which is transformed into a spaceship strolling through the sea of clouds, which has a taste of Hayao Miyazaki's animation world. In short, each Murakami's work hides a joyous temperament of "unexpected and reasonable".

Turning waste into treasure is a form of artistic expression that we are no stranger to. However, the most important thing is never the technique of "transformation", but the eyes that discover beauty behind it. When we think about the outside world from a novel perspective, what we get is an immeasurable new artistic beauty.